I came across an old article from Picture Post about, what they called a "Poor Man's Race Meeting" held in Newport in August 1946. I can't show any of the pictures because they are still owned by Getty Images but following this link will lead you to a sample image on their website and to a further one.

I'd be interested to hear from anyone who knows about these horse races in Newport. Judging from some of the photos in the article, this one was very well attended and held in a meadow overlooking Traeth Mawr. I believe it may have taken place in Berry Hill Farm, so Nevern, stictly speaking!

It was a race meeting in a very basic form. As the Picture Post puts it "The field may be rough, the crowd rougher and perhaps the roughest of all are the riders." They rode in gum boots and sweaters, rather than silks, with cardboard numbers pinned to their backs. The starter fired his shotgun from his vantage point on the back of a lorry. Girl guides served tea and onlookers included prisoners of war. Frustratingly, no names are given in the article, nor much sense of local colour. There is only talk in general term about these "flaps" or poor man's races. Prize money could be as much as £100 and starters ranged from locals to "mysterious strangers". There were trotting races too over a one mile course. A bit of digging around online shows that flapping is still popular in Ireland and on the borders of Scotland. It's horse racing not run under Jockey Club Rules and there's a description of a meet here which gives some idea of the atmosphere. Does it still happen in Pembrokeshire at all?

I bet there are some good stories about these races. Was this, I wonder, a one off event in Newport or a regular feature?
Posted by Vivien at 14:02 No comments: 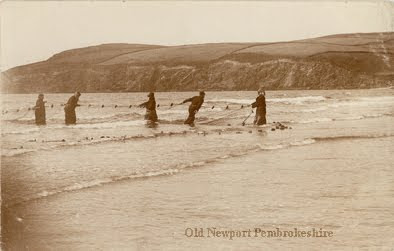 I came across this image recently and it intrigues me. Seine net fishing for salmon and sewin has a long history in the Nevern estuary. Dillwyn Miles thought the monks of St Dogmaels introduced this type of fishing to the area. It involves laying a net with floats at the top and weights at the bottom, in a crescent shape from the shore. The nets used on Traeth Mawr were large and usually laid by boat and required a team of five to pull them in. It was heavy work so it's interesting that in this photo, which dates from 1904, four out of five of the people fishing were women. This is more apparent when the image is enlarged. 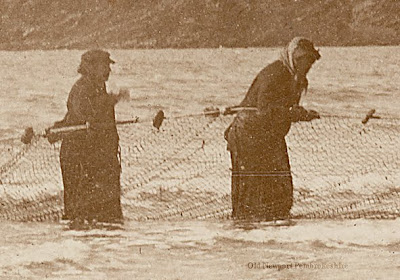 The woman on the left below seems to be wearing a tall Welsh hat. The long skirts look thick and sodden and must have made this very heavy work.

If anyone knows who these people might have been, I would love to know. The photographer is a bit of a mystery too. In the message on the back of the card, he says that this was his own photo but I can't quite make out the signature:-

Declining fish stocks have seriously restricted the issuing of licenses for this type of fishing but I took this picture of Seine net fishers at work in June. You can just spot them on the left of the picture silhouetted against the sea. 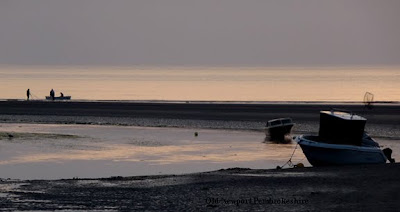