Gorwel and the buildings on Parrog Bach

The area of the Parrog known as Parrog Bach still contains several reminders of Newport's seafaring past.  I wrote about some of the remaining buildings a little while back but there's always more to be discovered.

By co-incidence, two people on the same day sent me interesting photos of Parrog Bach and they are both happy for me to share them. The first two pictures appear courtesy of Alec James and are taken from across the Nevern estuary towards Parrog Bach. The first image is particularly interesting as it dates from the days when the Parrog was still very much a working harbour. A sailing vessel is moored at the quayside and a man in a top hat is sculling himself across the river in the foreground of the picture. Dillwyn Miles has an a very similar photo in The Mariners of Newport (2006) showing the man in the foreground in a slightly different pose. He says that the vessel is the 28 ton dandy Newland and that the sculling man was a ferry man. He certainly has the customary board at the ready to get passengers aboard dry-footed.

There are three buildings on the quayside behind the moored boat in this photograph, a warehouse which is intact, flanked by what looks like two further ruined storehouses. At first I found it hard to work out exactly what these buildings were. Then I realised that the image shows the view across the estuary towards what is now the holiday cottage, Camelot, confirmed by the fact that the buildings on the quay appear in this position on the England and Wales Valuation Office Survey map 1910-15. They no longer exist today. Stone from the larger warehouse in the picture was, I believe taken to build the Memorial Hall in the town.  Behind these stores and warehouses the photo shows a further, whitewashed building which looks more cottage-like in appearance. Again, this building no longer exists. There was a limekiln in roughly this spot at the beginning of the twentieth century so was this another limeburner's cottage? Although this one looks a little grander. 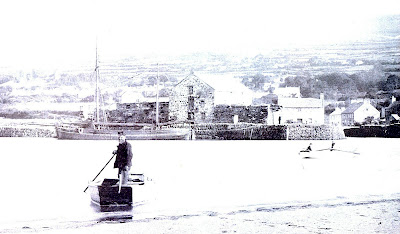 The postcard below shows the view from roughly the same spot and I think dates from the 1950's. Intriguingly, there's a ferry in this photo too, again with the landing board at the ready. Getting to Traeth Mawr by a rowed ferry was still common in those days. By this period all the storehouse buildings had gone to be replaced by two cottages, Camelot and Gorwel which are still there today. Camelot was built from the ruins of a warehouse which could be the one shown intact in the top photo. It is interesting that in the 1950's there were still further buildings to the left of Gorwel on Parrog Bach. Now only the ruins of one of these buildings remains, barely noticeable under a tangle of brambles.

It's interesting to note the sorry state of the seawall in the 1950's. 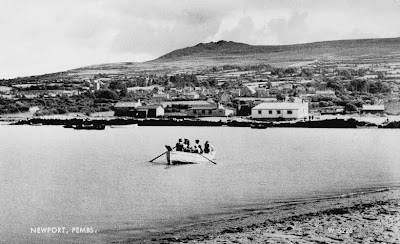 This is much the same view taken in 2011with the seawall restored to a similar height to the wall in the first picture. 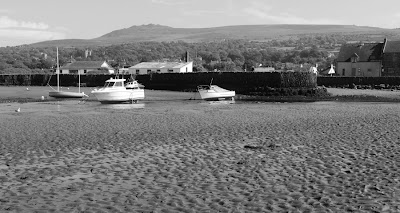 The final photo below was supplied by Pat McGregor, the current owner of the holiday cottage Gorwel

I'm not sure of the date of the image, possibly 1940's. Gorwel is the wooden cottage with the veranda to the left of this picture, painted in seaside stripes. Again two storage sheds (or is the first one a house maybe?) are shown beyond Gorwel. The far one was I believe used in those days by one of the local rowing boat hire firms. You can see some of the rowing boats lined up on the grass in this picture. 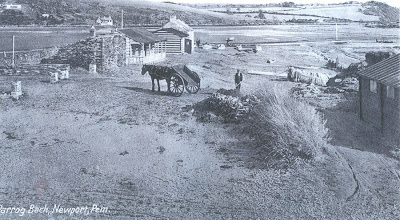 According to local historian Reg Davies, this particular parcel of land was once owned by the Barony of Cemaes but by the 1930s the site of Gorwel had passed into the hands of Dr David Havard of East View who sold it to Mr Roach Thomas in 1937. Mr Thomas built the cottage in this picture for his consumptive daughter so that she could benefit from the sea air. I'm not sure what happened to the daughter but by the early 1940's the house had been sold to Gladys Evelyn Evans whose daughter in law Elizabeth replaced the wooden house with the current one in 1992. Although it is a more sophisticated building, it still keeps the character of the old one. 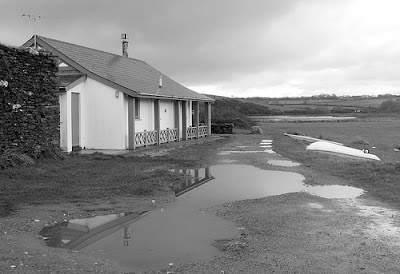