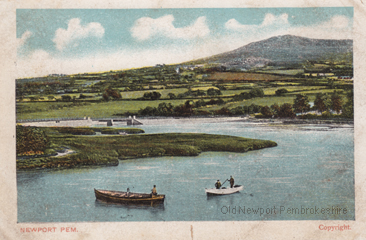 These days. the bridge over the River Nevern in Newport is a busy focal point. It's rare to go there even in winter and not see people scanning the mudflats for interesting birds or simply admiring the sunset.  Two years ago, an osprey was spotted there, although all I saw of it was a tiny dot disappearing into the distance. I have seen a spoonbill though and a passing cattle egret. "I was in Egypt last week and saw hundreds of these," a man paused from scanning it with his binoculars to tell me. "Now I've rushed over from the other side of the county to see this one." Sometimes otters snuffle around under the seaweed at low tide after crabs or a seal puts up it's head, stares and then vanishes again.

There's been a bridge across the Nevern at this point at least since Elizabethan times when the existence of a six-arched bridge was recorded by George Owen of Henllys. There was probably a crossing of some sort much earlier than this because the pilgrim route via Nevern to St Davids passed this way.

Story has it that the bridge was later demolished to prevent the spread of "sweating sickness". After this stepping stones were used to cross the river at low tide and these can still be seen on the upstream side of the bridge when the water is low enough. 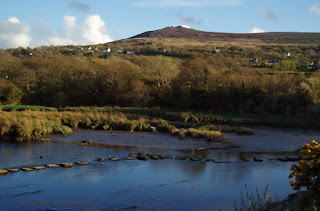 At high tide two sisters, Elizabeth and Hannah Griffiths from the cottage nearest the bridge at Penybont operated a ferry to row people across.

Horses and carts would ford the river at low tide.

Martin Lewis has an interesting story of one such crossing. (Newport Pem. and Fishguard revisited or, for Welsh speakers, there's a longer version here). John Laugharne was working at Berry Hill Farm at the time and was returning from an errand in Fishguard with one of the farm's carts. He decided to stop at the Golden Lion to quench his thirst. After a few beers he went on his way but by the time he reached the ford, the tide was already coming in. Farm workers knew he was in trouble when the horse and cart returned to the farm without its driver but it was dark by then and John could not be found. His body was washed up in the estuary the next morning.

It's a good story, but who was this John Laugharne? Because some of my ancestors were Laugharnes, I was keen to find out.  The story was told to Martin Lewis by the late William Lewis of Dinas and Martin knows no more than he has already recorded. The drowning was said to have prompted the setting up of a committee to raise funds for a bridge and this committee was formed in 1891 so I was excited to find a death recorded in 1890 for a John Laugharne, aged 29, from Nevern. This fitted Census data from 1881 for a John Laugharne who was an agricultural labourer along with his parents Daniel and Catherine,living near enough to Berry Farm for it to be feasible for him to have worked there. It seemed a perfect fit  until the death certificate arrived. This John Laugharne hadn't drowned, he had died of pneumonia after suffering from diabetes for the previous two years. He was also, at this time, a journeyman stonemason. There were no other deaths recorded for a John Laugharne in the area at this time. I tried other spellings Larn/Larne/Laugharn but with no success. Perhaps the story. like many present day Newport yarns, grew in the telling and he was pulled from the river alive, only to die from pneumonia later or maybe the name is wrong or the death was never recorded.

Whatever the truth of this story, the committee managed to raise £1400 for a new bridge, half coming from the County Council who dawdled about sending the cheque, and the rest from public subscription. The iron girders and lattice parapet railings were sent by rail from Messrs Pierson and Co, Fenchurch St, London but the construction was carried out by Messrs Clifford and Sampson Morgan of Haverfordwest. The bridge was rebuilt from 1999/2000.

The image at the top of this piece was taken by Chas Edwards in the early 1900's, when the bridge was still new. One of the boats in the foreground looks as though it might have been a ferry but I'm not sure why one would have been needed once the bridge had been built although I have heard talk of a ferry which used to take golfers from the bottom of Long Street. Here is a view of the same bridge in the 1950's:- 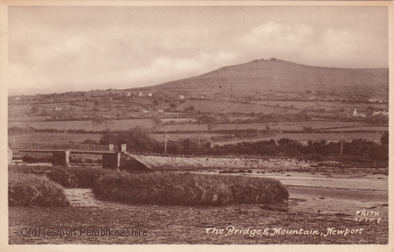 And this is the refurbished bridge today. There's usually a few cars parked here because it's a good place to start a walk along the coast path to the sands at Traeth Mawr:- 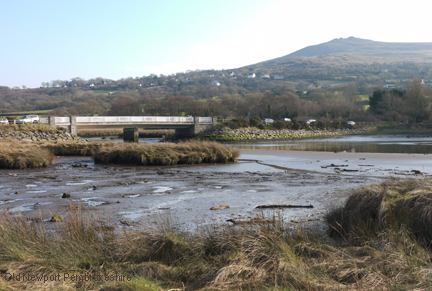