Crossing the Nevern: Parrog ferries and fording at the chain

Even in living memory, the Nevern estuary in Newport has become considerably shallower. Now, at low tide it's usually possible to wade across almost anywhere at the Parrog, even at the very mouth of the estuary. In the nineteen sixties and seventies, however, crossing wasn't quite so easy and the usual advice was to cross at low tide at "the chain" where the water was at its shallowest. People still talk about "the chain" which no doubt confuses many visitors as there is rarely a chain visible. So what exactly is this mythical chain?

The silting up of the Nevern estuary has not just happened in recent times. Local legend has it that it began when the bridge was errected a little further upstream in the 1895 to replace the stepping stone crossing (more of this in a later post) It seems feasible that this could have altered the flow of the water and reduced the scouring effect of faster-moving water. By the early twentieth century, silting was already beginning to be a problem and some mariners stretched a chain across the riverbed close to what is now the Boat Club to hold back some of this silt. The effect was that a deposit built up on either side of this chain making the river shallower at this point and providing a good crossing place at low tide. The picture below shows the effect quite clearly:- 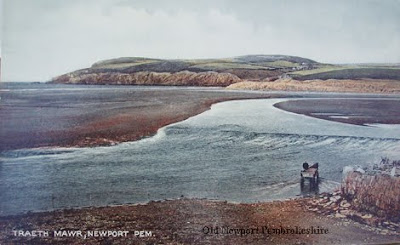 A horse and cart is in the foreground ready to take advantage of the shallow crossing. Today the chain is rarely visible, although Tyrone Williams tells me it does occasionally appear when tides and water movement are right. It's still a good place to cross and, when conditions are right, the water is now little more than ankle deep. 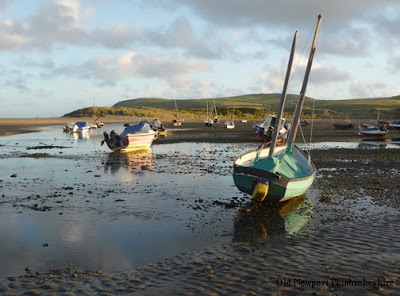 When wading across, look out for the small flat fish, or dabs, which sometimes dart out from underneath your feet. When I was a child I remember people using tridents to catch these. It requires quite a bit of nerve and accuracy. If you don't calculate the angle of refraction properly, it's easy to spear your own feet which is perhaps why the practice seems to have died out. The fish are very small anyway and not really worth the trouble.

When the estuary was harder to ford, there would be quite a few ferries waiting to row people across. Here's one making the crossing in the early 1900's:- 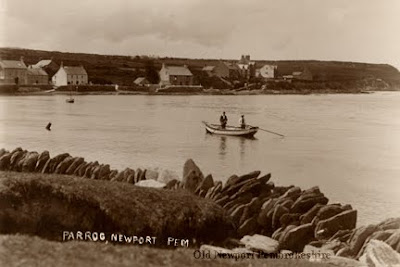 Looked at in detail you can see the board propped in the bows ready to be let down to help passengers step ashore dry-shod:-

Similar boards can be seen in this 1950's photo of ferrymen waiting at the edge of the river for their fares:- 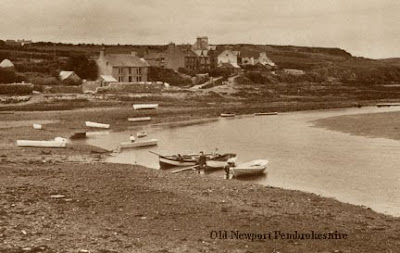 The most famous ferryman of this era was Jack Price who lived in Seagull Cottage. He was nicknamed Jack Price No Change. He charged a penny at low water and tuppence when the tide was in but whenever his passengers produced larger coins, he always denied he had any change. He was rumoured to wear several waistcoats to stop his loose coins rattling and to decant his money into a thermos flask which he kept at the bottom of the boat. His wife would come out from time to time to take the full thermos and replace it with an empty one on the pretext of bringing him tea. When he wasn't rowing he could be found sitting outside Seagull Cottage scanning the horizon with a telescope and would talk of the days when the big ships still visited the harbour.

He had been a merchant seaman in his younger days, going to sea in the winter months when business was slack but earned enough from his ferry service that, according to local stories, he used to take all the coins he had accumulated up the hill to the bank in Newport in a wheelbarrow (See Martin Lewis Newport Pem and Fishguard Revisited and Dilwyn Miles The Mariners of Newport Pembrokeshire).
Posted by Vivien at 08:42